September 20, 2014
Ugh. I suppose I could sum up the last few months with that classic scene from Stanley Kubrick's The Shining. The one where Shelley Duvall finds Jack Nicholson's manuscript... 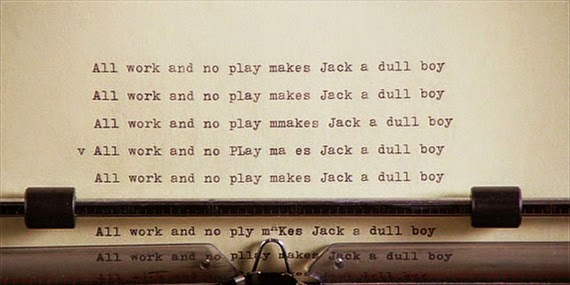 I haven't lost my mind or anything. But time devoted to anything outside of paying the bills has been hard to come by.

Popular posts from this blog

Back on the Rack

March 24, 2015
It's been a long time. But I'm still here. Still working on stuff. Over the last few months, here's what I've been up to. I took a brief hiatus around the end of last year and the start of this year. The holidays are always busy. And work was busy as well. Work's really continued to be busy. I consider that a good thing but it does hamper my ability to devote time to writing. During this hiatus, I took the time to explore what the tabletop RPG community had been up to. I read a number of books, played in some games, ran some games, funded some Kickstarters -- all that stuff I enjoy doing when I'm not the "Transylvania Guy". This is generally a time when I collect ideas. It was helpful when I came back from hiatus to look at Transylvanian Adventures  again with fresh eyes. I've been in contact with a potential co-author for TA . He's very interested and a legit writer to boot. Because he's legit, his schedule is just as crazy as mine
32 comments
Read more

October 30, 2014
Don't thank me. Thank Deadstop. Here to add some treat to your holiday are some of Dr. Frankenstein's prized creations with a few tricks up their sleeve. This is the first entry in the monsters section of The Hanging Judge's Guide to Transylvania . Enjoy. And don't forget to leave the lights on when you go to sleep. Transylvanian Adventures' Abominations
9 comments
Read more