Sneak Peek at the Quickstart Map


Thanks to everyone for the patience. This has been a long, hard road. Hopefully, Book 2 goes faster and Book 3 goes even faster. Once I get things drafted and into layout, I'll start doing little blurbs on the chapters and how they've changed (if they have).

Here's the preview of the Quickstart adventure map. It will be for 4-5 2nd Level Transylvanian Adventures characters (which will be included) but it could be run with 4-5 DCC fantasy characters as well. As you can see, there is at least one giant spider, three women in nightgowns and something undead down there at the bottom. It's called "The Winter Home". And I'll find a way to offer it as a free downloadable PDF on Free RPG Day.

Hope you're looking forward to it... 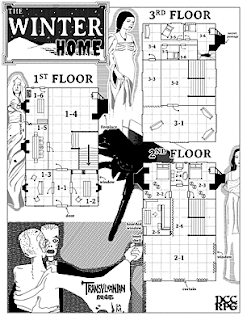 Popular posts from this blog

Back on the Rack

March 24, 2015
It's been a long time. But I'm still here. Still working on stuff. Over the last few months, here's what I've been up to. I took a brief hiatus around the end of last year and the start of this year. The holidays are always busy. And work was busy as well. Work's really continued to be busy. I consider that a good thing but it does hamper my ability to devote time to writing. During this hiatus, I took the time to explore what the tabletop RPG community had been up to. I read a number of books, played in some games, ran some games, funded some Kickstarters -- all that stuff I enjoy doing when I'm not the "Transylvania Guy". This is generally a time when I collect ideas. It was helpful when I came back from hiatus to look at Transylvanian Adventures  again with fresh eyes. I've been in contact with a potential co-author for TA . He's very interested and a legit writer to boot. Because he's legit, his schedule is just as crazy as mine
32 comments
Read more

October 30, 2014
Don't thank me. Thank Deadstop. Here to add some treat to your holiday are some of Dr. Frankenstein's prized creations with a few tricks up their sleeve. This is the first entry in the monsters section of The Hanging Judge's Guide to Transylvania . Enjoy. And don't forget to leave the lights on when you go to sleep. Transylvanian Adventures' Abominations
9 comments
Read more